A tandoori is one of the ovens that are commonly made of clay or metal and is used to do baking and cooking of various kinds. The heat used in a tandoor is generated from a wood fire or burning charcoal which exposes the food being cooked to hot air and open flames. Temperatures inside a tandoor oven can get very high. Tandoor ovens can be used to bake different types of bread including samosa, which is a form of snack that has been fried with potatoes, peas and even onions. It is one of my favourite snacks!

But first, what is Indian cuisine exactly? With India being such a large country that can be difficult to define as the types of dishes and spices used vary from region to region. It consists of varieties of both traditional cuisines’ and regional cuisines which are integrated to make a wonderful combination. Indian cuisine offers a vast variety of food choices as a result of the diversity in the culture, soil type, occupations and other factors.

Regional dishes typically use ingredients for flavour that are locally available such as herbs, spices, vegetables and fruits. Religion and particularly Hinduism is one of the factors which influences how Indian food is cooked, and what type of food is prepared. For example there is a lot of vegetarian cuisine in India due to the influence of Hinduism.

If you have a chance, you should definitely visit a highly rated Indian food restaurant where the food is prepared by experienced staff and often based on recipes and spice blends that have been passed down for generations. Indian cuisine is very exciting due to its exotic selection of ingredients, well-organized dishes and other delicious flavours. Indian cooking uses a lot of flavours such spicy, sweet, sour and hot which makes it very difficult to get bored with the food! 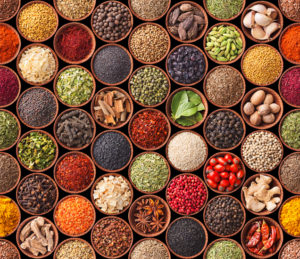 These spices are selected carefully considering their health benefits (many spices are know to be anti-inflammatory, for example) and how they influence the flavour. Indian food also uses curry which can be in different forms such as red, green, watery and hot. These are part of the spices used in the Indian cooking. In fact, the simplest cooking using curry can involve use of a stew that has been made of lentils and beans or peas. This can be served with flatbread and it is delicious!

Some of the main tandoor-cooked pieces of bread and other dishes include: 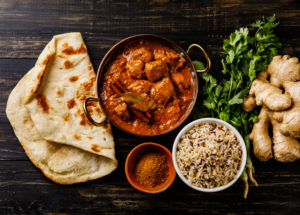 Each region has its own way of making food and adding amazing flavours. Indian cuisine offers a huge range of choices in their food and the country continuously adopts new ideas on a regular basis.

The food in India has been influenced by visitors from around the world such as the Portuguese, the Persians, and the British. This is one of the reasons why the food is so diverse. Indian cuisine is famous around the world due to its extraordinary taste and flavours.